Eduardo Abaroa presents the series Sarape-CD, which reproduces the image of a pirated CD recorded in the MaiCanadá Inc Studios whose original was lost. It was bought around 2002 in the streets of Mexico City and probably had cumbias and narcocorridos on it. By reproducing the image of the CD on a piece of fabric that will be part of a garment of clothing, the artist alludes less to the specific function of each object than to the idea of function in and of itself. It is important to appreciate the text printed on the pirated disc, which invokes the right to subvert artistic and commercial property with a narrative of social revendication. On the other hand, the sarape is a multifunctional object, usually used as an article of clothing, a blanket, or a carpet. The reference to the parangolés—the carnival cloaks of Brazilian artist Hélio Oiticica—is thematically and formally inevitable.
In the same exhibition, Abaroa presents the sculpture Geometría remota / Remote Geometry (dodecahedron and rectangular prism, 2019), made with hundreds of silicon buttons from remote controls, recovered from the technological junk sections of Mexico City’s markets. The button is a material artefact that allows us to have an impact on a network of electrical, electronic and media interactions; it is a piece of machinery that determines and facilitates a certain perception of our world. This facilitates the contemplation of an inert object, the result of programmed obsolescence, which has an uncomfortable yet forgotten relationship with our bodies and our daily lives. The dodecahedron is a platonic solid formed by twelve pentagons (five-sided figures) which in this work allude to the fingers of the hand. Plato theorized that the gods used the dodecahedron to organize the constellations in the sky; Kepler ascribed this form to ether, one of the five elements accounted for in his diagram of the Universe. The fascinating regularity of geometry makes it commonplace, even today, to relate it to the totality. 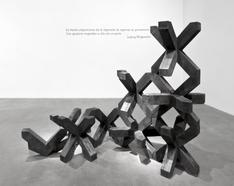