This is the second showing of Gabriel Orozco’s series Veladoras Arte Universal, previously presented at the Museo de Bellas Artes in Havana, Cuba during the XIII Havana Biennial in 2019. The pieces are made from fishnet and lace tights, a garment of clothing common among women who work in airports, banks, police stations and museums, as guards or custodians. Ever since childhood, Orozco noticed the tights worn by Cuban women as an interesting and amusing detail that contrasts with the seriousness of their uniforms and the positions they occupy.
His curiosity arises from an aesthetic attraction to the material and the patterns formed by the fabric. The foundation of these pieces also comes from an everyday product: Orozco reconfigures the paperboard around which pantyhose tend to be wrapped to create abstract geometric sequences, which in turn evoke anthropomorphic shapes given the mental association that already exists between this texture and the body. 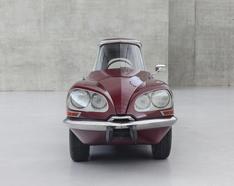