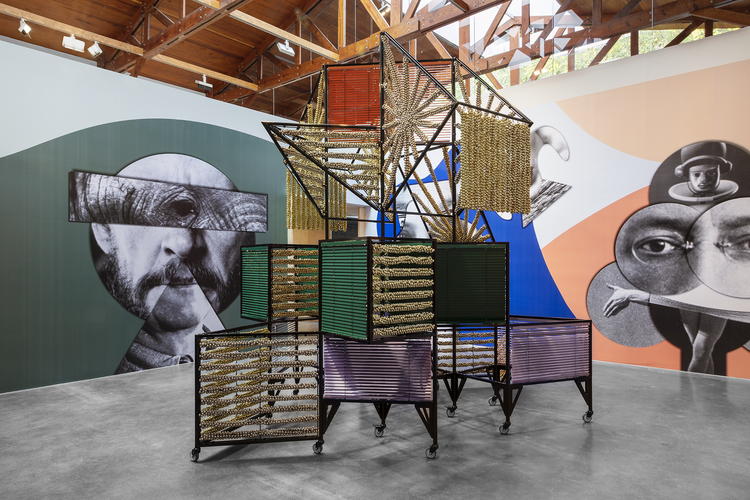 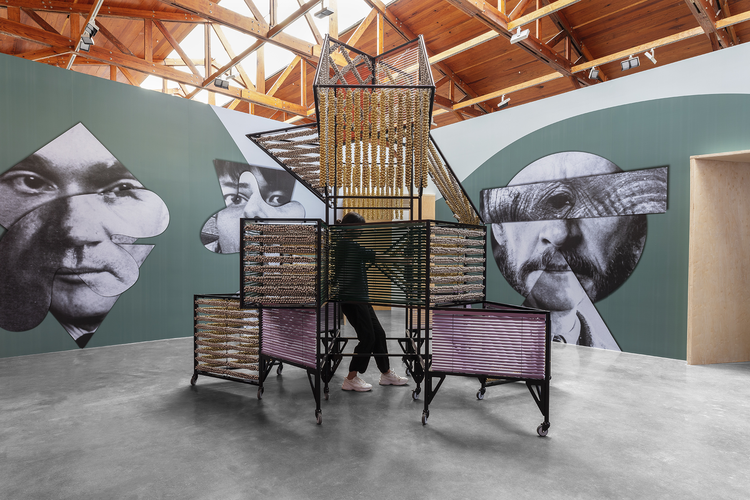 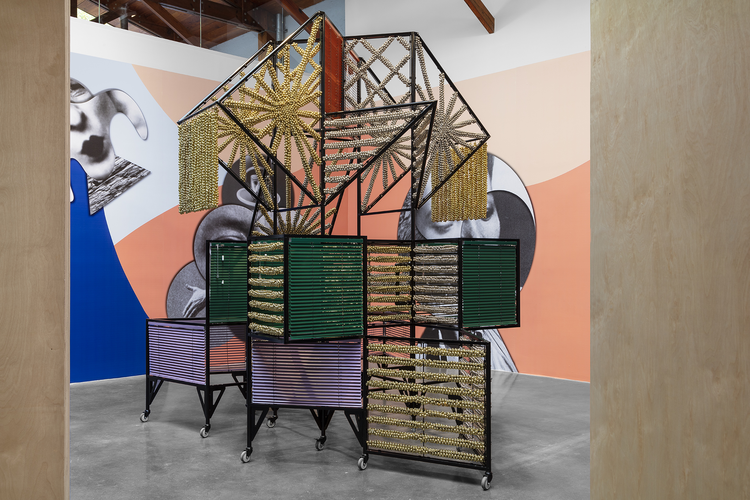 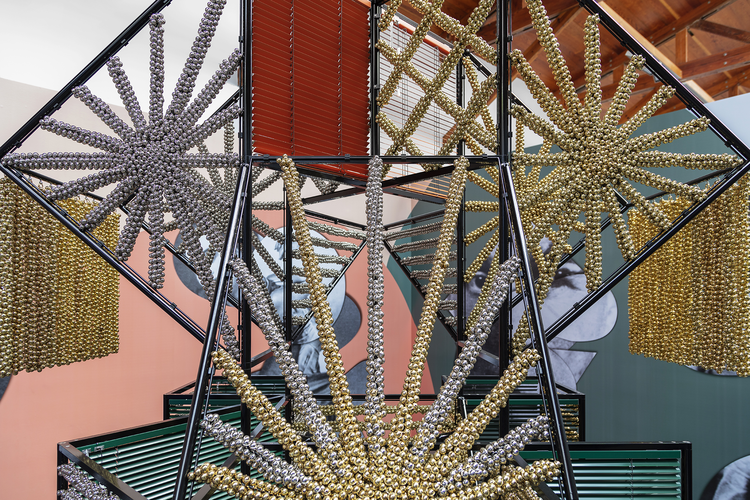 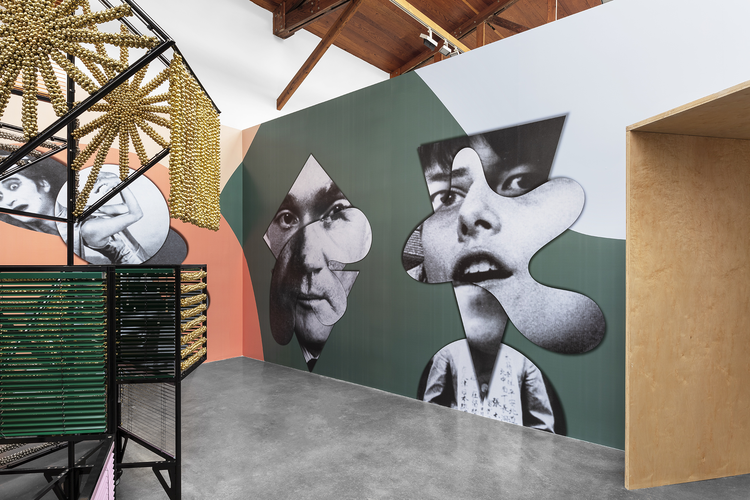 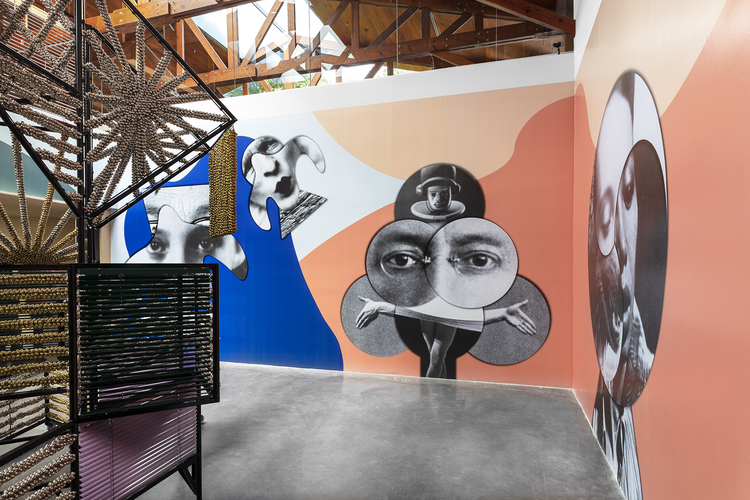 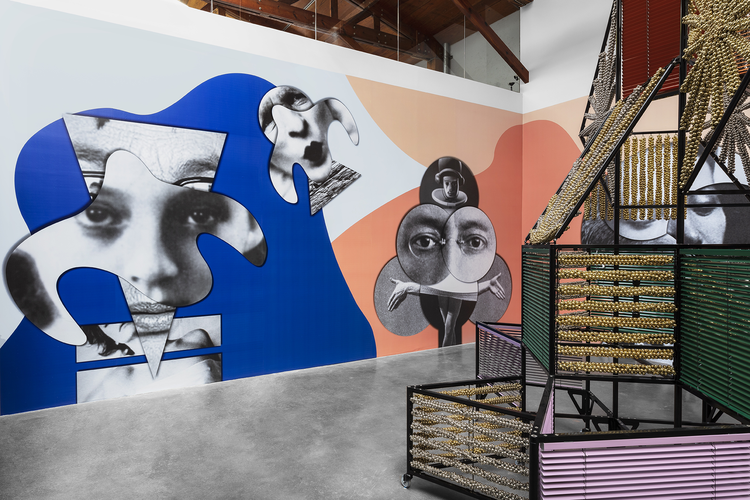 Haegue Yang (Seoul, 1971) presents an ensemble that combines a performative sonic sculpture, Dress Vehicle with the wallpaper, Eclectic Totemic. The dazzling performative sculpture emerged from research on costumes and movements, ranging from the Western avant-garde at the beginning of the twentieth century, such as Triadic Ballet (1922) by Oskar Schlemmer, to the fashion of drag queens, pagan traditions, and shamanism. Her ongoing artistic inquiries into the notion of body, figuration, and performativity, alongside geometry, drive her investment in performative sculptures, which are maneuvered by a person inside holding the handles. Sonic Dress Vehicle – Hulky Head employs the artist’s signature materials, such as venetian blinds and bells. While blinds obscure the body and gaze, the bells resonate subtly with movements and rattling sounds emerge through tactile contact with the floor.
Initiated in 2011, the wallpaper gradually became an essential part one of the artist’s visual languages, drawing a panoramic backdrop for her presentations of sculptural pieces. As a sculptor, Yang interests in the notion of flatness, juxtaposed with figurations in diverse modes, such as anthropomorphic, creature-like or minimalistic. The populated sculpture, which inhabits the environment imposed by the wallpaper, enables a scripted journey into a world of diaspora and hybridity. Eclectic Totemic contains fragments of numerous references points, which are usually invisible in Yang’s work: the mustache of George Orwell, faces of Marguerite Duras and Petra Kelly, the costume designs of Vaslav Nijinsky, Igor Stravinsky eyes, a figure from Oskar Schlemmer’s Triadic Ballet, etc. The giant totems are patchworks of those seemingly irrelevant figures from different continents, time periods, and contexts and now commonly inhabit the abstract landscape featuring three off-primary colors, reminiscent of the artistic trio of Aubette (a historical building in Strasbourg, France), namely Sophie Taeuber-Arp, her partner Jean Arp, and Theo van Doesburg. Extraordinary totemic characters provide epic tales of figures, time, and space, which are crucial to understand Yang’s oeuvre. 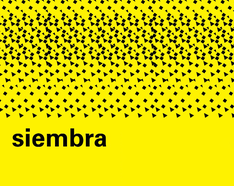 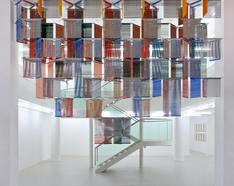