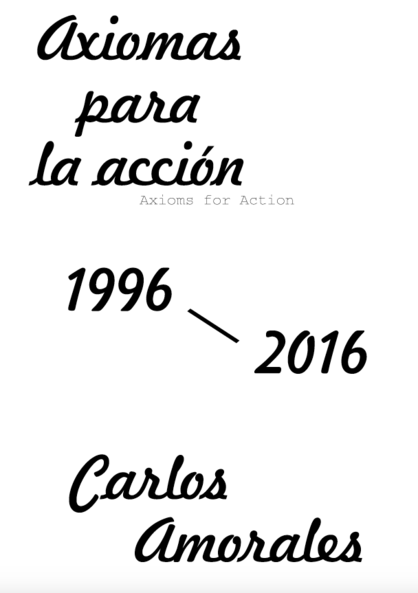 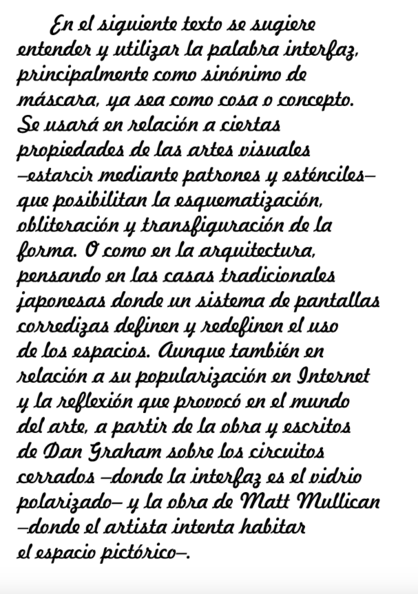 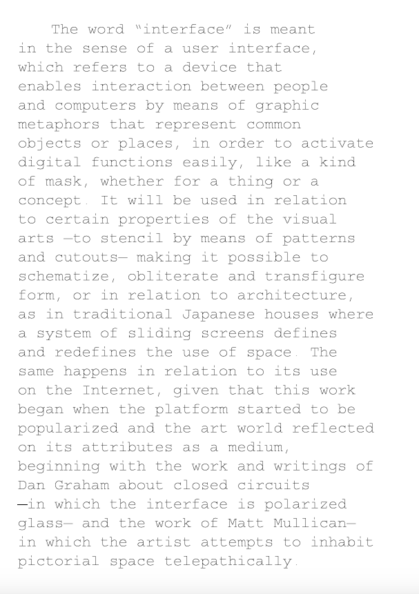 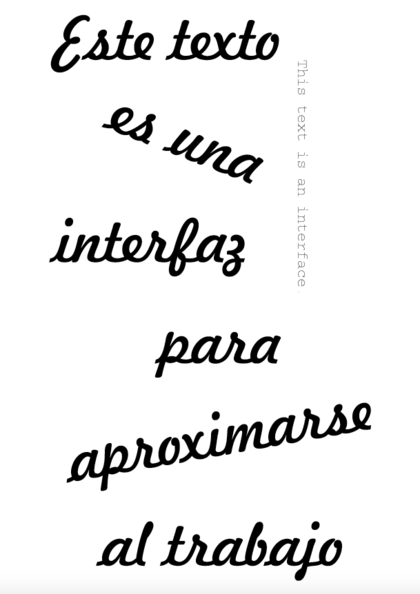 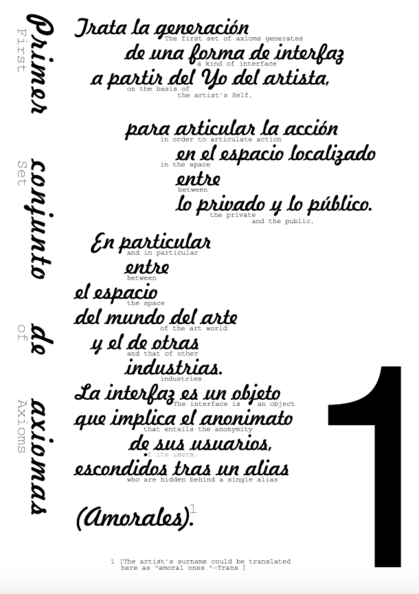 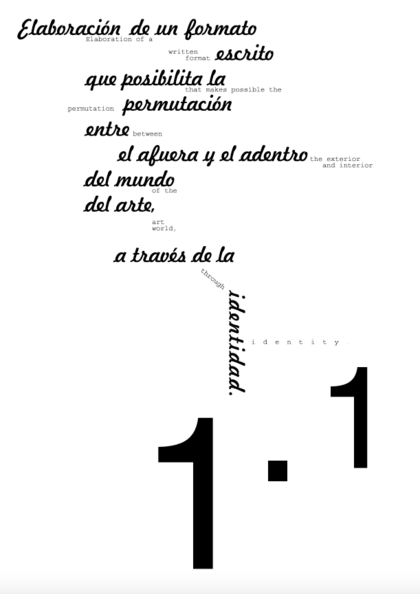 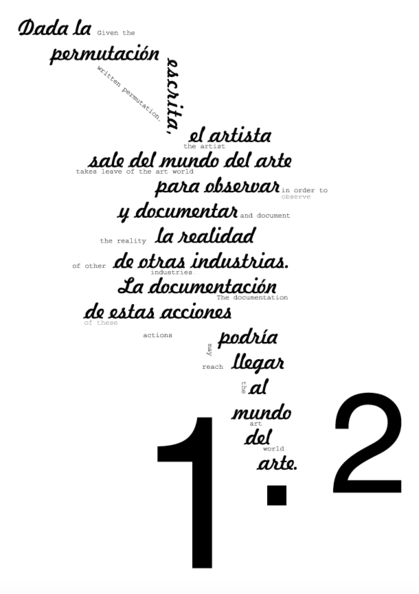 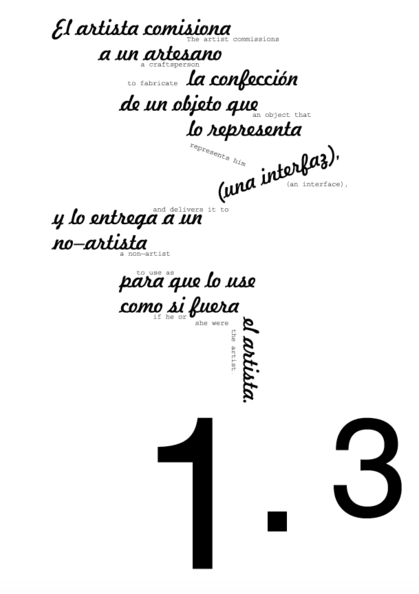 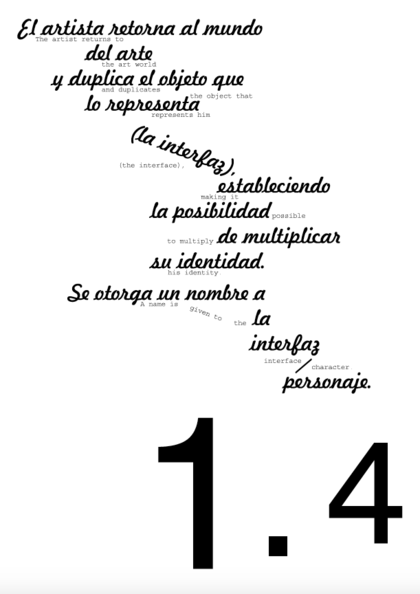 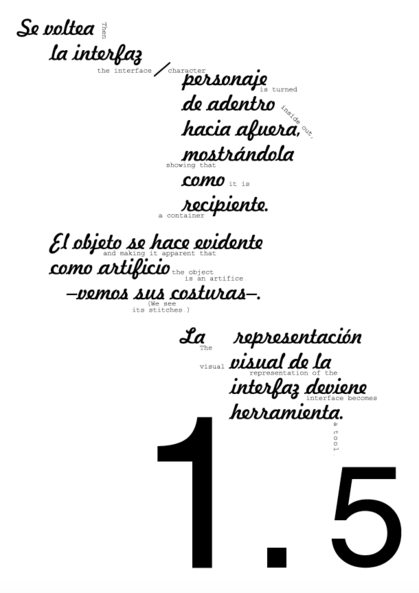 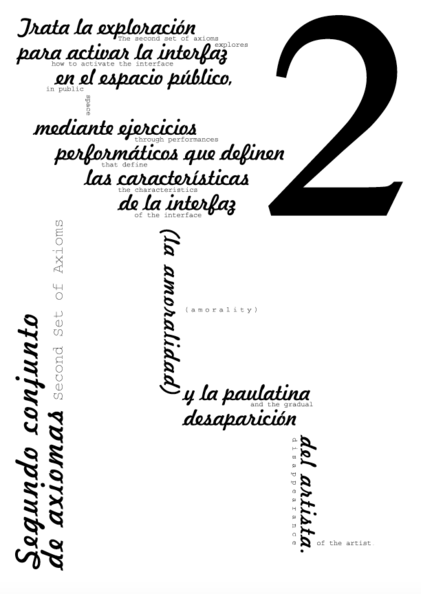 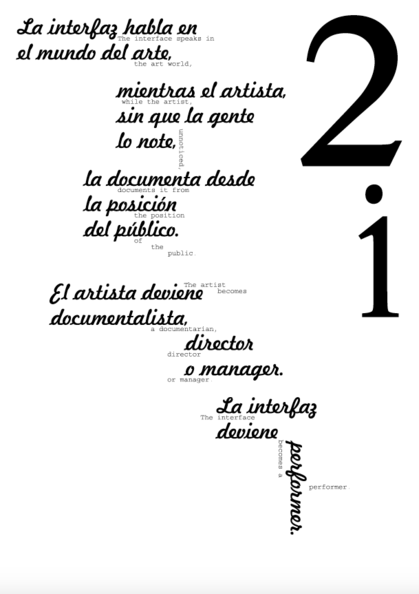 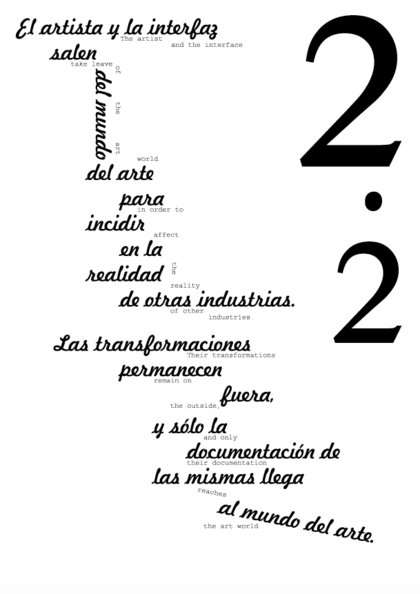 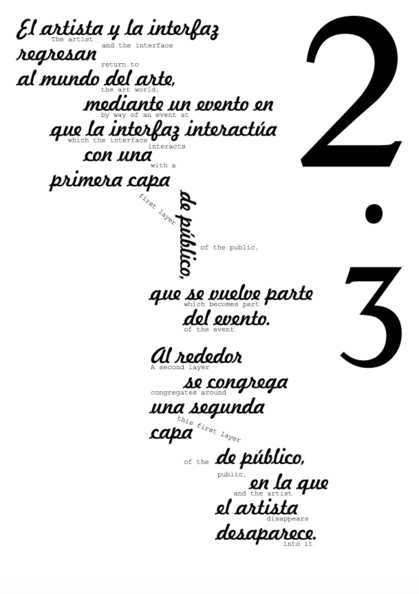 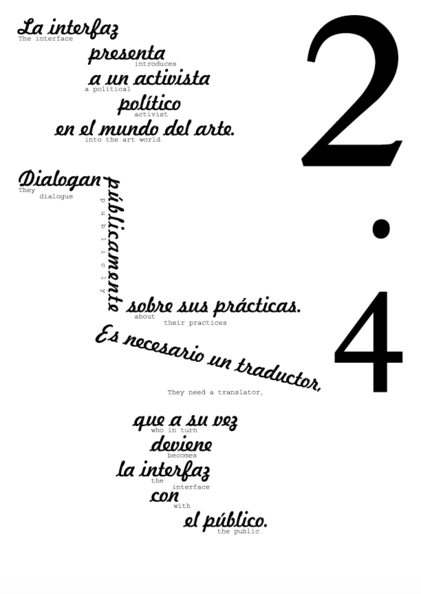 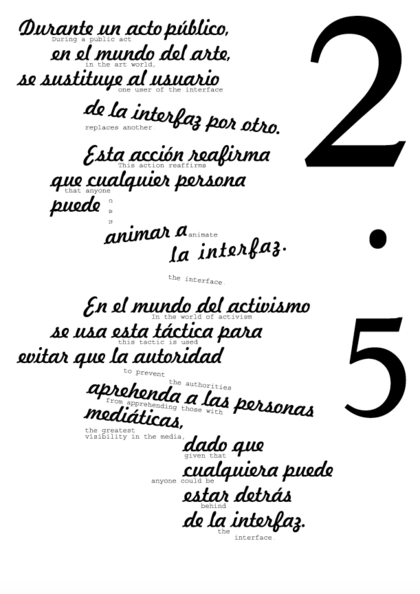 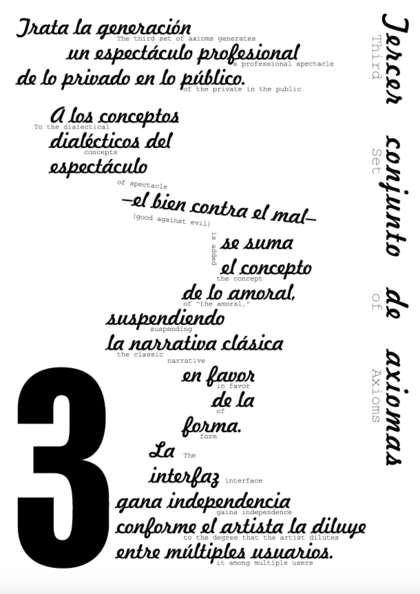 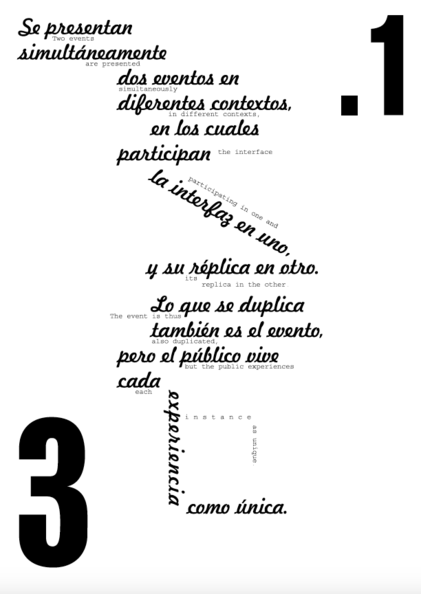 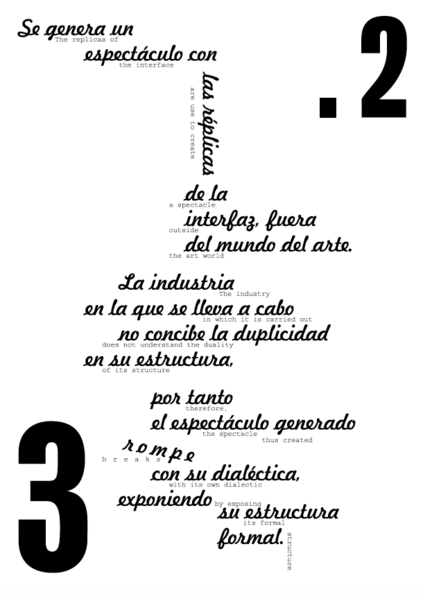 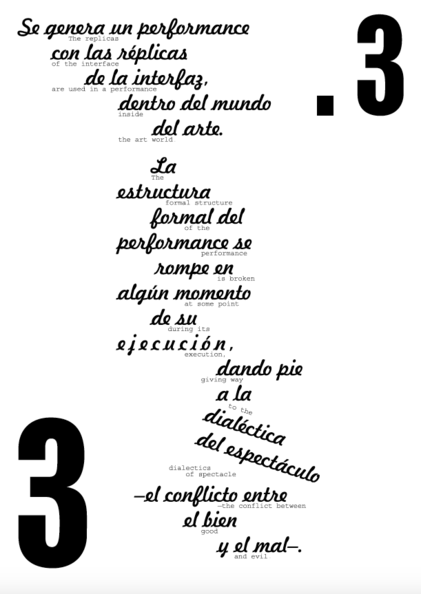 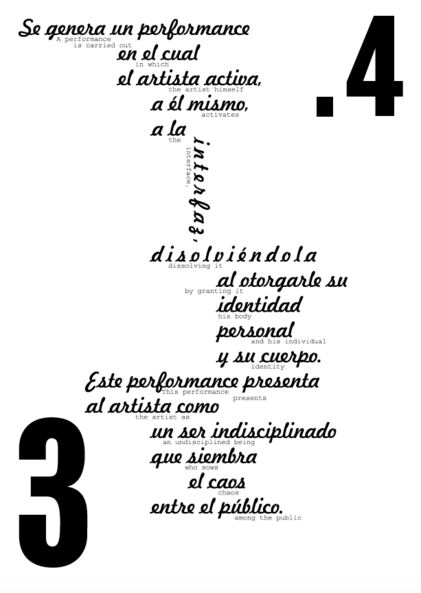 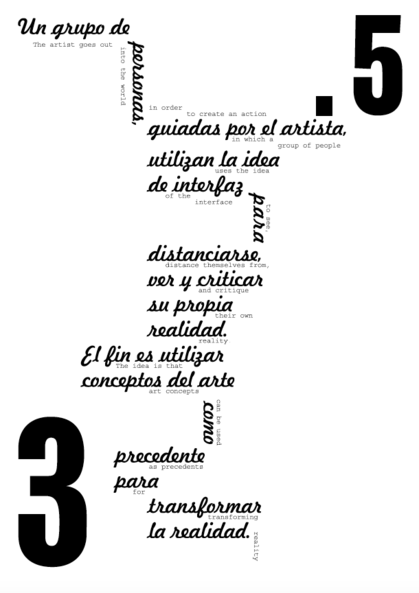 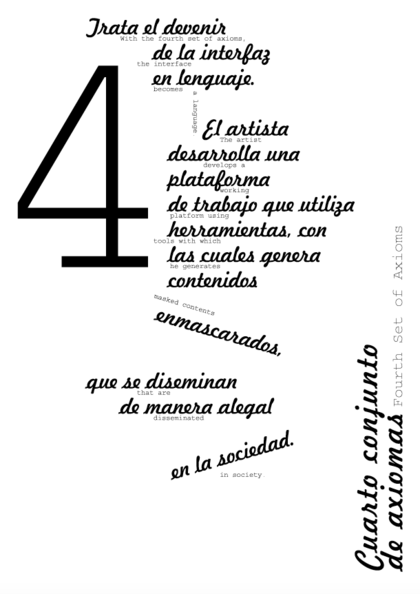 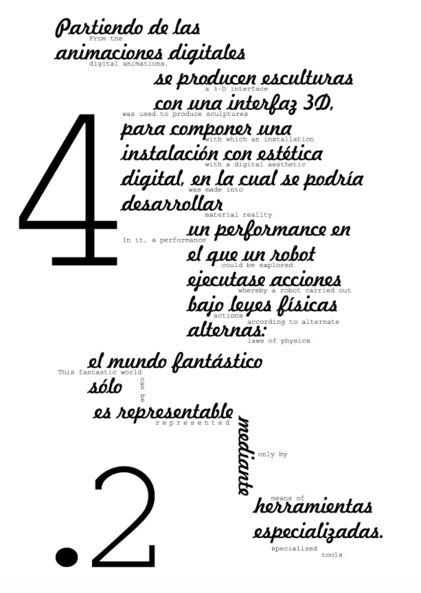 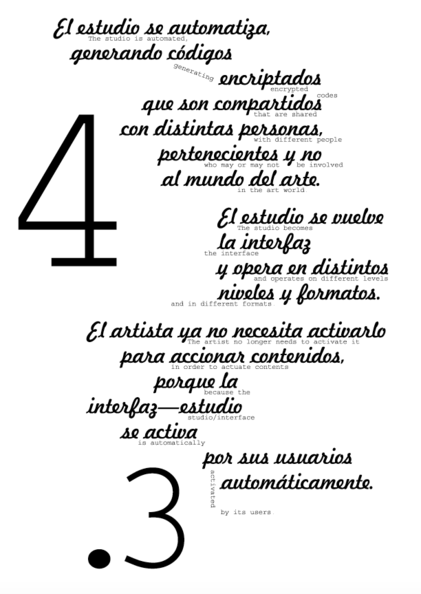 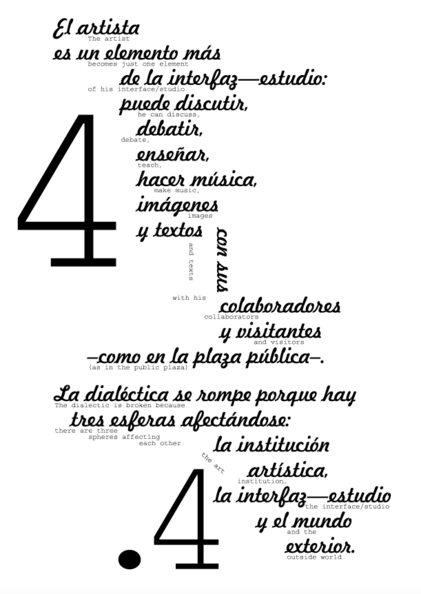 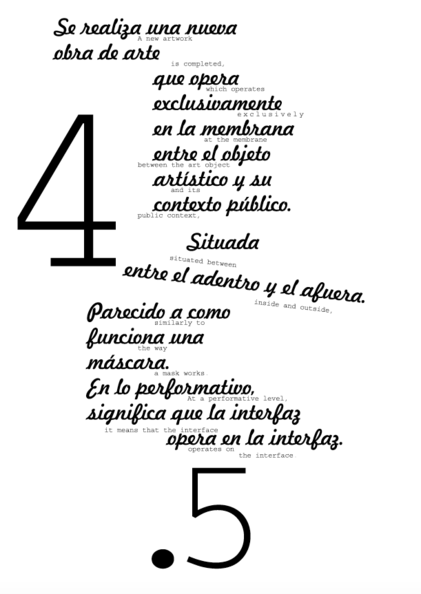 #kurimanzuttoTakeoutOnly read the manifesto by Carlos Amorales Axioms for action, 1996 - 2016

1. THE FIRST SET OF AXIOMS
The first set of axioms generates a kind of interface based of the artist’s Self, in order to articulate action in the space between the private and the public, and in particular between the space of the art world and that of other industries. The interface is an object that entails the anonymity of its users, who are hidden behind a single alias: Amorales.

AXIOMS FOR ACTION 1.1
Elaboration of a written format that makes possible the permutation between the exterior and interior of the art world, through identity.

AXIOMS FOR ACTION 1.2
Given the permutation, the artist takes leave of the art world in order to observe and document the reality of other industries. The documentation of these actions may reach the art world.

AXIOMS FOR ACTION 1.3
The artist commissions a craftsperson to fabricate an object that represents him (an interface), and delivers it to a non-artist to use as if he or she were the artist.

AXIOMS FOR ACTION 1.4
The artist returns to the art world and duplicates the object that represents him (the interface), making it possible to multiply his identity. A name is given to the interface/character.

AXIOMS FOR ACTION 1.5
Then the interface/character is turned inside out, showing that it is a container and making it apparent that the object is an artifice. (We see its stitches.) The visual representation of the interface becomes a tool.

2. THE SECOND SET OF AXIOMS
The second set of axioms explores how to activate the interface in public space through performances that define the (amoral) characteristics of the interface and the gradual disappearance of the artist.

AXIOMS FOR ACTION 2.1
The interface speaks within the art world, while the artist, unnoticed, documents it from the position of the public. The artist becomes a documentarian, director or manager. The interface becomes a performer.

AXIOMS FOR ACTION 2.3
The artist and the interface return to the art world in the form of an event at which the interface interacts with a first layer of the public, which becomes part of the event. A second layer of public congregates around this first layer, and the artist disappears into it.

AXIOMS FOR ACTION 2.5
During a public act in the art world, one user of the interface replaces another. This action reaffirms that anyone can animate the interface. In the world of activism this tactic is used to prevent the authorities from apprehending those with the greatest visibility in the media, given that anyone could be behind the interface.

3. THE THIRD SET OF AXIOMS
The third set of axiomsgenerates a professional spectacle of the private in the public space. The dialectical concepts of spectacle (good against evil) are supplemented by the concept of “the amoral,” suspending the classic narrative in favor of form. The interface gains independence to the degree that the artist disseminates it among multiple users.

AXIOMS FOR ACTION 3.1
Two events are presented simultaneously in different contexts, the interface participating in one and its replica in the other. The event is thus also duplicated, but the public experiences each instance as unique.

AXIOMS FOR ACTION 3.2
The replicas of the interface are used to create a spectacle outside the art world. The industry in which it is carried out does not understand the duality of its structure; therefore, the spectacle thus created breaks with its own dialectic by exposing its formal structure.

AXIOMS FOR ACTION 3.3
The replicas of the interface are used in a performance inside the art world. The formal structure of the performance is broken at some point during its execution, giving way to the dialectics of spectacle—the conflict between good and evil.

AXIOMS FOR ACTION 3.4
A performance is carried out in which the artist himself activates the interface, by granting it his body and his individual identity. This performance presents the artist as an undisciplined being who sows chaos among the public.

AXIOMS FOR ACTION 3.5
The artist goes out into the world in order to create an action in which a group of people uses the idea of the interface to see, distance themselves from, and critique their own reality. The idea is that art concepts can be used as precedents for transforming reality.

4. THE FOURTH SET OF AXIOMS
With the fourth set of axioms, the interface becomes a language. The artist develops a working platform using tools with which he generates masked contents that are disseminated in society.

AXIOMS FOR ACTION 4.1
A disciplined labor structure—a studio with craftspeople—is generated wherein a set of artistic and non-artistic objects is produced and made commercially available in the world. The artist generates his own industry using what he has learned from all previous axioms. Henceforth, action is understood as the artist’s industrial process from the standpoint of his studio. The digital animations are now made, taking the performances with the interface as a point of departure.

AXIOMS FOR ACTION 4.2
A 3-D interface is used to produce sculptures based on the digital animations, to create a material reality – an installation – with a digital aesthetic. It allows for the exploration of a performance in which a robot carries out actions according to alternate laws of physics. This fantastical world can only be represented by means of specialized tools.

AXIOMS FOR ACTION 4.3
The studio is automated, generating encrypted codes that are shared with different people who may or may not be involved in the art world. The studio becomes the interface and operates on different levels and in different formats. The artist no longer needs to activate it in order to actuate contents because the studio/interface is automatically activated by its users.

AXIOMS FOR ACTION 4.4
The artist becomes just one element of his interface/studio: he can discuss, debate, teach, and make music, images and texts with his collaborators and visitors (as in the public space). The dialectic is broken because there are three spheres affecting each other: the art institution, the interface/studio and the outside world.

AXIOMS FOR ACTION 4.5
A new artwork is completed, which operates exclusively at the membrane between the art object and its public context, situated between the inside and the outside, similarly to the positioning of a mask. At a performative level, it means that the interface operates on the interface.

This configuration of axioms is the formal approach that I have followed to conceive and produce artworks that are performative, visual, musical and literary narratives. Through the years, an unconscious theme has emerged and gradually become evident in many of my artworks: many of them suggest, at a narrative level, the tense relationship between the individual and the group.

The following are some examples:

- A wrestling mass spectacle shows the inner struggle of the self, representing in public what is perhaps the most private of internals dialogues, in a carnivalesque event.

- A masked person, disguised as a devil, stands over a star painted on the floor of a gallery. The devil invites the audience to dance with him.

- A rock music record label that popularizes an adolescent longing for a subculture from an earlier era, which becomes part of contemporary youth culture after being appropriated by the pirate economy.

- The intimate image of a room full of moths that appeared in my mind when saying goodbye to my dying grandmother is made by me into an art piece that is appropriated and exploited by the fashion industry; the image becoming a sort of meme.

- A formal reflection about the natural catastrophe that destroyed the city where I was born, changing its society.

- A photo-novella narrative about an undeclared war against drugs that I cannot manage to understand, made of media photographs of dead bodies, “talking” in an unintelligible language.
- The tension between the ideal of anarchism and the need for a society governed by rules, in the form of a chaotic musical instrument that by being played by the audience, generates the imposition of rules by the institution.

- The erasure and modification of a civil code by multiple lawyers, who read and re-write it according to their own personal interests.

- The introduction of an unintelligible typography into a cultural institution, with the intention of replacing every text, so no one can understand anything that has been written.

- A puppet animation showing the brutal lynching of a family of immigrants is a reflection on the vacuum of State power and how, as a consequence, people take the law in their own hands.

- A rock/noise band that plays songs based in Artaud´s description of how he became institutionalized in a mental hospital, losing control over his own life. The last song is called -- --The Masses and is about how the masses do not like his poetry.

- A room full of black and white vignettes shows a medieval-like society that is sick with Tourette’s syndrome, as a reflection on the phenomenon of “Shit Storms” that has become commonplace on social media.

Together, these narratives propose a discourse about the objectual and conceptual use of the mask in society. The mask is understood by acknowledging that its place is in the liminality existing between the self and the group, as a device for managing the relationship between them. A rhetoric of the mask is co-formed by a working methodology in the form of axioms and a theme in the form of narrations.