kurimanzutto presents Obsidiana (obsidian) by Jimmie Durham, a project developed over the last two years. Durham’s wide artistic production ranges from drawing, sculpture, installation, and video to performance, literature, and poetry. He lived and worked in the city of Cuernavaca, Mexico from 1987 to 1994. Afterwards, he started traveling back and forth throughout Eurasia; these travels stirred up a concern in him about the idea of Europe: “which doesn’t describe an actual continent but is only a political obfuscation”. Fifteen years after his departure from Mexico, he presents his first solo show in the country.

Durham refuses the expectancy of purity in art. His work is always embedded in and affected by the location in which it is produced. In this exhibition, Durham reflects upon the obsidian: first, as a beautiful raw material, secondly, as a stone inlayed by multiple connotations, heavy cultural pre-conceptions, and layers of history; all of which the artist manifests by enclosing the material in three different abstract sculptures displayed in individual atmospheres.

Obsidian, a black volcanic glass with an irregular molecular structure whose tonalities vary according to the direction in which it is sectioned, was widely used by the Aztec, Toltec, and Huastec people.

The first work at the entrance of the exhibition, The Doorman, is one of Durham’s distinctive anthropomorphic sculptures. This character, made out of iron, Murano glass, and gold, shows a red obsidian heart and personifies the god Tezcatlipoca. Tezcatlipoca means “smoking mirror” and was represented by the Aztecs with a polished black obsidian on his chest. He was Quetzalcoatl’s brother and complementary deity. According to the Nahua legend they created the world together, however for the Toltec they were rivals and opponents. In European mythology, Vulcan for Romans, or Hephaestus for the Greeks, was a god who emerged from the profundities; he is described as a lame male whose foot was grabbed while he was trying to escape from hell. In the same way, Tezcatlipoca is associated with the underground and the darkness, and depicted with his right foot replaced with an obsidian mirror, bone, or a snake. This coincidence was at the origin of the research that led Durham to this exhibition.

The artist has expressed his distrust of written language as it steals away memories and defines “how and what to think as well as how to be”(1), and yet this very tool plays a central role in his artistic practice; but instead of establishing connections, the presence of texts (mistranslations, wordplays, and object labels) in Durham’s work, triggers meaningful disruptions. The viewer is humorously involved through his falsely innocent and often off mimics and verbalization of the attitudes and rules of artistic creation and consumption. As in Bertolt Brecht’s plays, no attempt is made to distract the audience from the fact that what they are seeing is only a play —or a sculpture in Durham’s case—; on the contrary, acknowledging it is essential. Nevertheless, this supposed permissiveness of fiction serves to reveal certain historical complicities.

For this project, Jimmie Durham has immersed himself in a process of knowledge of the Mexican stone: its natural state and characteristics and the possible ways to transform it. Durham reflects on the cultural features associated to the very existence of a rock like this. For him, acknowledgment of a material and derivative ideas occur simultaneously, thus any intellectual development rests precisely on physical encounters. 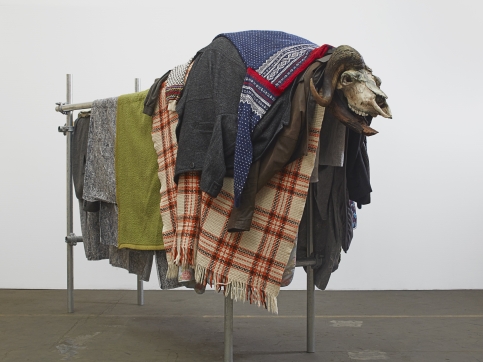