“Permanencia voluntaria / Stay as Long as You Want An exercise in conciliation and dislocation. How an artist’s video is shown but also consumed. A movie theater, not only a different space but a different material backdrop-the movie screen. As with the Market Economy project, we used preexisting structures, followed the context’s rules. There was an entrance fee. Videos were for sale. Not only gallery artists.”

A Tale of kurimanzutto, SITAC I Exchanges in Contemporary Art. Chronicles, Controversies and Bridges, January 2002.

During the nights of the 27, 28, and 29 of April, Cinemanía's projection room number two in Plaza Loreto will be transformed into kurimanzutto to host the exhibition Permanencia Voluntaria, the gallery's third project. In this occasion, the exhibition is made up entirely of videos, thus the best place to show the artworks is a movie theater.

The first screening will show the premiere of Sangre y pantimedias (Blood and Pantyhose), a video-compilation made from 1991 to 1994 by Abraham Cruzvillegas, Daniel Guzmán, Damián Ortega, and Luis Felipe Ortega. This compilation will no doubt become a benchmark for contemporary art in Mexico. Drunker, a piece by Minerva Cuevas, will be projected onto the outside screen; it is a strong and silent real-time testimony of the artist's progressive intoxication as she drinks a whole bottle of tequila in front of the camera.

On the 28, a video made by Gabriel Orozco in Amsterdam will be shown for the first time. Seven short videos made by Bas Jan Ader in the 70s will also be featured. After his mysterious disappearance at the end of the 1970s, Ader's work has developed a cult following, this is the first time his work will be presented in Mexico

Rock My Religion, a classic piece by Dan Graham will be projected on Saturday, along with two videos made especially for this exhibition by Jonathan Hernández and Alejandro Carrasco. The strange filming of a crash and its aftermath, a film by young French artist Marine Hugonnier, will also be screened on Saturday.

Finally, on the screen near the bar, a series of videos made expressly for this area will be projected.

“Ever since its formal opening in August 1999 with a sale of artist's editions at a public market in the Roma neighborhood, kurimanzutto has explored the possibility of a commercial establishment deliberately outside the walls of the gallery. With the purpose of freeing the production by contemporary artists from the pre-established setting of an architectural venue or a social attitude, kurimanzutto is the first Mexican gallery that works without an exhibition space, creating specific in-situ interventions instead. In Permanencia voluntaria, kurimanzutto presented before a full house, a very notable choice of videos from artists both international and represented by the gallery; from classics like Dan Graham's Rock My Religion and Dial For History —the essay on plane hijackings made by Johan Grimonprez for the last Documenta— to a hilarious video by Jonathan Hernández in which a judge of an athletics contest is hurt by a javelin. The biggest surprise of the night was, without a doubt, Sangre y pantimedias, a compilation of early work by artists associated with the Temistocles group: Damián Ortega, Daniel Guzmán, Luis Felipe Ortega, and Abraham Cruzvillegas. In hindsight, these videos (Cruzvillegas continuously battered against the floor by Daniela Rosell stumbling on him over and over with the aid of a cane or the classical Remakes in which Luis Felipe Ortega and Daniel Guzmán reenact conceptual performance art from the 70s) evidence the originality of the nineties generation in Mexico. And, as someone mentioned, the cinema setting (popcorn and theater seat included), compelled the viewer into a contemplative relationship with video that would be difficult to achieve in a gallery space.

One can see this effort by kurimanzutto as an exciting attempt to refute the objetualist view of the conventional gallery, but also as a sign of the commercialized future of the current curatorial practice.”

“Whenever its artists had produced enough work, Kurimanzutto would pop up with a new exhibition. Its second, Permanencia voluntaria, ran over a weekend at an old movie theater with a lineup that included local artists’ re-creations of important video pieces by Paul McCarthy and Bruce Nauman—which they’d read about in books but never actually seen—as well as Exodus, Steve McQueen’s Mexico City premiere.” 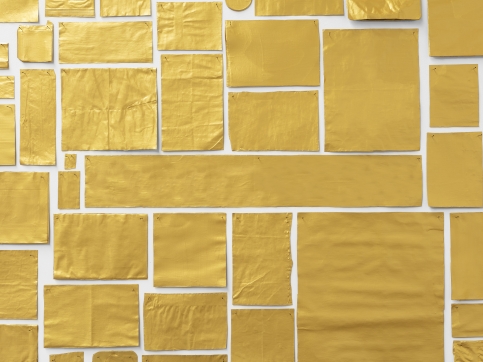