kurimanzutto presents Tarek Atoui’s project Organ Within at its cabinet space in New York City. Operating as an open sound laboratory, and instrumentarium, Atoui will debut a new hybrid sculptural object that engages numerous technologies in order to re-envision the spatialization, perception and performativity of the traditional organ. The Organ Within is the result of his ongoing collaboration with instrument-makers Léo Maurel and Vincent Martial, and their research into historical church pipe organs, modular synthesizers, and the sonic experiences of deaf people.

For this presentation, Atoui partners with Robert Aiki Aubrey Lowe from CONTROL, Brooklyn’s leading synthesizer shop. As host and activator of the project, CONTROL has invited a diverse group of sound artists and musicians from New York’s experimental music community to venture and play the organ at kurimanzutto in New York. This group of collaborators will occupy the cabinet space one week at a time, to work with the instrument for research and recording purposes. These residencies will be open to the public, with a weekly performance held every Saturday at 3 pm.

Out of this continuous improvisation, Atoui and CONTROL will curate a final performance in the Rotunda of the Solomon R. Guggenheim Museum on June 27, 2019 at 7 pm. To mark the closing of the two month project all resident artists will gather together to perform a simultaneous session. A moderated conversation with Atoui and his collaborators will precede the performance.

Organ Within is an itinerant exhibition organized in different movements. Beginning at kurimanzutto, New York and culminating at the Solomon R. Guggenheim Museum, the project will later travel in successive movements to The Hepworth Wakefield, England during Yorkshire Sculpture International (June 22 –September 29, 2019) and will extend to the Sharjah Art Foundation, United Arab Emirates, in March 2020. 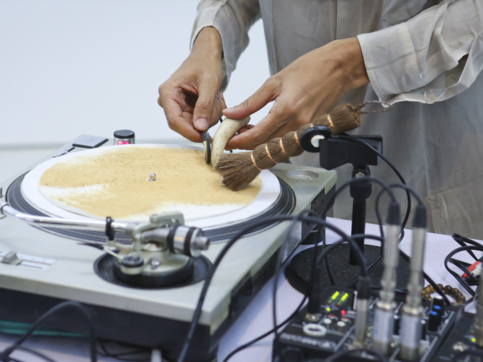