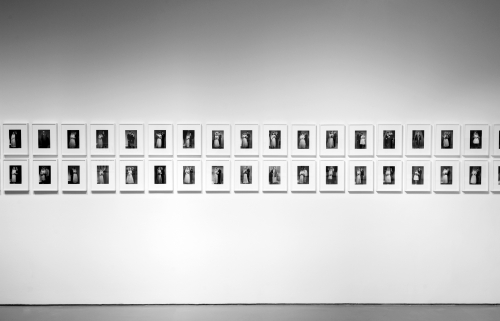 Acclaimed Lebanese artist Akram Zaatari combines the roles of image-maker, archivist, curator, filmmaker, and critical theorist to explore the performative role photography plays in fashioning identity. As one of a handful of young artists who emerged from fifteen years of civil war and a short-lived era of experimentation in Lebanon’s television industry, his work demonstrates an enduring appreciation for amateur, journalistic, and commercial photographic practices. Zaatari is also a co-founder of the Arab Image Foundation (AIF), an organization established in Beirut to preserve, study, and exhibit photographs from the Middle East, North Africa, and the Arab diaspora from the 19th-century to today. Within this endeavor Zaatari discovered the photographs of Hashem El Madani (1928–2017), who recorded the lives of everyday individuals inside and outside his humble Saida studio in the late 1940s and 1950s. These photos are deceptively factual in appearance, sliding between demure documentation and revealing displays of subconscious desire that exceed the capacity of the lens.

In an interdisciplinary practice that thereby positions lens-based media as both specimen and subterfuge, Zaatari participates in the discourse against photography and its complex archival legacy. For this exhibition he positions the seemingly simple fold as a narrative form, a reorganization, an enduring obfuscation, and the memory of material. In his words, “a photograph captures space and folds it into a flat image, turning parts of a scene against others, covering them entirely. Every photograph hides parts to reveal others… What a photograph missed and that was present at the time of exposure will remain inaccessible. In those folds lies a history, many histories.” The work on display will attempt to uncover and imagine these stories, undertaking a provocative archaeology that peers into the fissures, scratches, erosion, and that which archives previously shed. Surveying the fertile interstices, Zaatari explains, “Unfolding is undoing, deconstructing, turning material back to its initial form.”