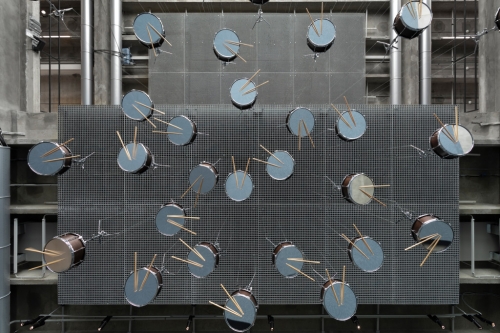 Responding to the architecture and acoustics of the 9.5- meeter high atrium space, Anri Sala has developed a site-specific installation with thirty-eight drums suspended from the ceiling.

The sound is generated by the movement of the sticks in response to the vibrations emanating from the speakers inside each instrument. At the heart of The Last Resort is a performance of Mozart's Clarinet Concerto in a Major, one of the fundamental musical creations of the Enlightenment, a time when European nations were rethinking the concepts of politics and science. Sala wanted to imagine what become of Mozart's Clarinet Concerto if it floated and floated like a message in a bottle. As Sala explains, "I had of the other, and their consequences upon arrival, exacerbating the prejudices, which in turn caused untoid devastation and loss".

How would a fictional journey through the winds, waves and currents of the high seas affect a musical masterpiece of the Enlightenment?