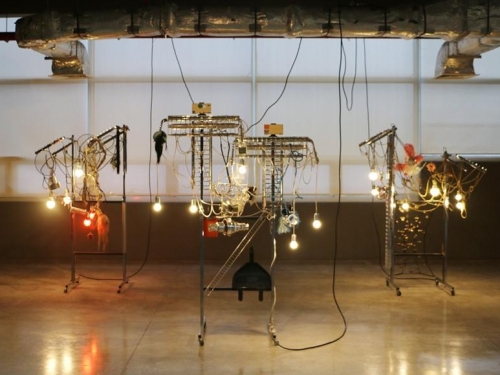 Strange Attractors is the UK’s largest exhibition to date by celebrated South Korean artist Haegue Yang. The exhibition’s title is a concept taken from mathematics and relates to complex patterns of behaviour in chaotic natural systems. Taking this theory as a starting point, Yang’s exhibition creates an environment in which uncanny and seemingly disparate ideas, cultures, relations and time periods coexist.

For the first time at Tate St Ives, the exhibition will be staged across both the award-winning top-lit gallery in the new building and the spectacular sea-facing gallery in the original building. Yang will transform these two spaces into an open-ended exploration of geometry, abstraction and the aftermath of modernism.

Strange Attractors addresses the context of St Ives and its relationship to modernism by bringing three artistic figures together. The new sculptural ensemble Sonic Intermediates – Three Differential Equations is in fact based on historic as well as imaginary encounters among artists Naum Gabo, Barbara Hepworth, Li Yuan-chia and perhaps Haegue Yang herself.