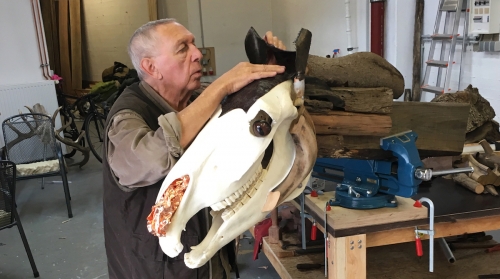 Jimmie Durham artist, performer, essayist, and poet, Durham had his first solo show in 1965 (we should probably be giving him two lifetime awards right now). His generously expansive artistic practice spans many mediums, including drawing, collage, photography, and video, but he is best known for his sculptural constructions, often made from natural materials, as well as inexpensive common objects that evoke particular stories.

These sculptures are often accompanied by texts that comment in a fun but incisive way on Eurocentric views and prejudices. Insistently invoking the limits of Western rationalism and the futility of violence, his work has also frequently referenced the oppression and misunderstanding of different ethnic populations around the world by colonial powers. Durham normally treats this material without the slightest trace of heavy seriousness; instead, he forges sharp criticisms that are imbued with insight and wit, and that pleasantly destroy reductive ideas of authenticity.

For more than 50 years, Durham has continued to find new, inventive and compelling ways to address the political and social forces that have shaped the world we live in. At the same time, his contributions to the field of art have been outstanding for their conceptual originality, their agile combination of dissonant parts and alternative perspectives, and their unstoppable playfulness. His work moves and delights us in ways that can never be anticipated. In everything he does, we are reminded that "sympathy is part of imagination and imagination is the engine of intelligence," to borrow one of his own lines. That deeply understanding intelligence radiates from his work like invisible rays of light, illuminating a way of seeing that moves and changes all who are lucky enough to cross his path.