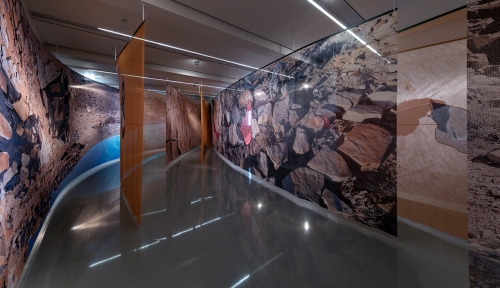 The first Australian exhibition of artist Mariana Castillo Deball is the result of MUMA’s invitation to the artist to undertake a long-term project here. For her project at MUMA, Castillo Deball has focused on Nilpena, an area north of Adelaide, which is home to one of the most well-preserved Ediacara fossil sites in the world. Now numbering around thirty such sites globally, the rich South Australian findings resulted in the naming of a new geological period. The Ediacaran Period, between 635 and 542 million years ago, directly preceded the Cambrian. Its large, complex organisms inhabited seafloors prior to the emergence of animals with skeletons and shells.

In 2018, Castillo Deball undertook a site visit to the Ediacara Hills with staff of the South Australian Museum who have significant holdings of the fossils in their collection and take annual site visits to the site for research and training. Using tactile methods such as ink rubbings and frottage, Castillo Deball documented the sandstone-based impressions, capturing images often more readable than the fossils themselves.

In Replaying Life’s Tape, Castillo Deball presents a material and virtual recreation of the paleoecology of the Ediacaran Period, combining objects, sculptural display systems and viewing technologies to consider the relationships between site, time and history. Following a recent international discovery in the Sahara Desert, hot pink – the oldest organic pigment extracted from bacteria fossils related to the time and environment of the Ediacaran period – will also play a key role in the exhibition.