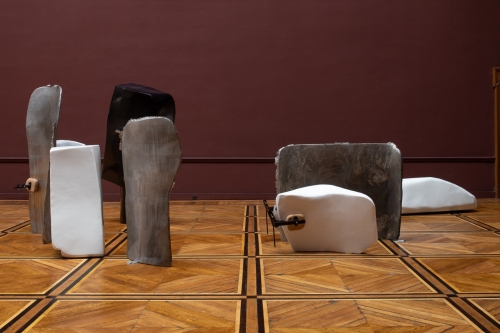 Nairy Baghramian is the guest of the Autumn Festival 2018 in Paris. Nairy Baghramian's work puts the history of sculpture into perspective, is based on the contingencies of the institutional context and borrows some of her references from the field of architecture, design or entertainment.

Nairy Baghramian pushes the boundaries between positive and negative forms, sculpture and mould, between the apparent strenght of the masses and the sesuality of the forms, sometimes underlined by the subtle chromatic play.

Maintainers is the title of a new series in which large cast aluminium parts are associated with monolithic blocks in coloured wax. This little refers in particular to the method of assembly obtained by the addition of varnished lacquer intermediates. Arranged against each other, these elements form a complex whole within which relationship of interdependence, opposition and resonance are organized​.