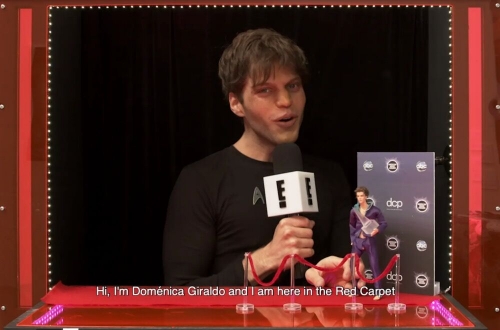 In the song Star by the group BROCKHAMPTON, Kevin Abstract raps one of the most interesting verses of the century: "Bruh, I don't fuck with no white boys, 'less that n **** Shawn Mendes". The whole song talks about fame and celebrities, but it is this verse that prompts Romeo Gómez López to develop the work The Woke Zone.

Before we talk fully about the work, it would be useful to put some aspects of the artists mentioned in context. Let's start with Kevin Abstract, leader of the aforementioned band, who has released three solo albums where he openly talks about his sexual relationships to the rhythm of beats and lighthearted and honest rhymes. Kevin is part of a young generation of openly gay black musicians, rappers and producers, including Frank Ocean, Keytranada, Lil Nas X and Tyler, the Creator; to whom we may add other much more disruptive queer artists of color such as Mikky Blankko, Yves Tumor, Khalif or Cakes Da Killa. Together, and with massive commercial success, they are challenging the notions of masculinity that exist within the hip-hop community.

On the other hand, we have Shawn Mendes, who is totally and completely opposite of the rapper. Mendes is white, straight, and one of the most popular pop artists amongst teenage audiences. In this case, his contemporaries would be more like Justin Bieber, Austin Malone, Taylor Swift (we are Team Taylor in the West-Kardashian-Taylor conflict) and the singer's "girlfriend", Camila Cabello, former member of the band Fifth Harmony. His relationship with Cabello is precisely one of the most important references within The Woke Zone. As the pop superstar that he is, Mendes has seen his life plagued by unexpected visits from the paparazzis, catching red-handed awkward moments and a lack of overall chemistry within the couple's interactions.

These cringy photos serve as evidence to the fandom to ensure Mendes' homosexuality. The young idol is not the epitome of masculinity: his body is not muscular, but slim and fit; he also makes certain movements that are considered feminine and has fine features. It seems fair to speculate that Shawn Mendes is a closeted gay and Camila Cabello is his beard. These rumors enrage the singer, and he has denied them repeatedly.

The Woke Zone is the staging of a fan fiction developed from the verse mentioned at the beginning of this text. With the help of puppets of Kevin Abstract and Shawn Mendes, we are presented a play in three acts: celebrities meet in an elevator after an award ceremony, and under the influence of alcohol and curiosity, they end up having sex and breaking their personal notions of monogamy, of desire and of the expectation of mandatory heterosexuality. This last concept, is the one that becomes more blurred during the play: at first Shawn Mendes is defensive, he speaks publicly about the damage that the rumors of his alleged homosexuality do to his public image; however, in private he is uninhibited and even an expert in the arts of sodomy.

Romeo wants to expose the hypocrisy within the desire that inhabits many men, who disguise their own homosexuality and / or bisexuality as homophobia, or those who give free rein to their libido by hiding and deceiving.
On the other hand, the public person of Kevin Abstract has also been taken care of: he is not the stereotype of the gangsta rapper that we have seen til exhaustion in different media, but he is not a queer with feathers and rhinestones either. The rapper is serious, with a quite generic style, like the one of any urban artist of the moment. He contrasts with some of his contemporaries, such as Lil Nas X, an outgoing, spotlight magnet with a  certain sassyness that is recognizable amongst queer people of color.

Abstract, I would dare to say, is quite homonormative, he does not shy away from including in his songs his sexual orientation and sex, but always within monogamous, closed and romantic relationships. In Romeo's work, the rapper gives in to his desire and breaks his moral ties, cheating on his partner. Another character who enters the realm of deception, similar to Shawn Mendes' situation with Camila Cabello.

However, for Romeo there is no doubt that Shawn Mendes is heterosexual, what we are seeing is the product of a fantasy, or rather, the fantasy of a fantasy; let's not forget that the original idea of ​​"fucking Mendes" comes from Kevin Abstract. Romeo just takes it to the next level.
Kevin is the one who sees Shawn Mendes as a subject of desire (ironic, if we take into account the tendency of the white gay community to exoticize black and racialized male bodies). The intense pornographic interaction that the musicians have in The Woke Zone is a scathing observation of the consumption of erotic images: as an audience, seeing the one who manipulates the puppets makes us accomplices of the spectacle of bodies that unfolds before our eyes.