Los teatros de Saturno presents new work by Adrián Villar Rojas, in his first solo exhibition at kurimanzutto. A project that consumes not only the long central gallery space, but expands to inhabit other spaces in the building, it reflects the abundant nature of his working process. Leading on from previous projects – particularly his recent exhibition Today we reboot the planet at the Serpentine Sackler Gallery in London – it brings together many ideas and ways of working that have long fascinated him.

Villar Rojas has, to date, been known primarily for his use of clay and concrete in large, monumental architectural and sculptural installations. Using a method he developed to allow the monochromatic surfaces of these forms to crack and fissure naturally, these works were inherently site-specific; not only were the installations created for particular locations, but they also were imbued with the ambient surroundings, reflecting the conditions of the place, both physically and metaphorically. However, the seeming immortality of these sculptures belie their ephemeral nature; these works are predominantly destroyed at the end of the exhibition, with the public presentation of artwork only ever being one aspect of a broader, more interwoven practice.

Villar Rojas has, since the beginning, incorporated numerous disciplines, materials and methods at any given moment. Drawing upon music, theatre, film, comics, pop culture, biology, literature and science fiction, the artist uses sculpture, film, drawing, carpentry, architecture, metalwork and jewellery-making as tools for complex research. Working with a team that travels to form Villar Rojas’ nomadic studio for each new project, the artist has constructed a production unit not dissimilar to a theatre group. As director, he moves between the micro-detail of a tiny brightly-coloured sculpture and the mapping of how each actor interconnects with the other; from the tiniest of stones to the orbit of these planets. The process of improvisation – where a found object from the street meets a carefully cast clay and plaster form, and delicate brass forms intersect fruit bought at the local market – is essential to this intricate and constantly shifting interplay of elements.

Villar Rojas’ exhibition in London in 2013 was formative in the development of this way of working. Within one of the vaulted and elongated historic rooms, the artist installed a multitude of clay and concrete sculptures on steel and glass shelves, resting alongside sprouting potato plants and bejeweled bread. Modes of representation sat side by side, with a life-size Kurt Cobain figure lying near an abstract geometric work. The infusion of the clay with plants and other organic matter reflected the desire of the artist to ‘force life’ into the neutral material of the clay. The grey, unfired clay, in turn, instilled an equality between objects – counterpointing an iPod against a tiny dead bird, an orange rind against a lump of clay, a robot against an astronaut.

In Los teatros de Saturno, we appear to have arrived on a new planet, where the natural and the manufactured are both super-abundant. Colour flourishes out of the earth, more prolifically than the poor potatoes that had attempted to grow from the clay and brick. In the interim, the garden seems to have been fertilized and watered, so that the organic and the artificial have blossomed into a field of activity. The bricks that covered the floor of the Serpentine have reverted back to their more fertile origins, and this profuse new growth has thrived and overrun the gallery space. The archivist is transformed into farmer or gardener, with the artist and his team present for the duration of the exhibition to tend the field.

As a parallel documentation of this transformation, in the kurimanzutto’s upstairs project gallery, Villar Rojas presents the pages of a fanzine constructed from the plans, emails, drawings and photographs that were produced during the making of the Serpentine’s Today we reboot the planet exhibition. This too is a metamorphosis, made in the studio in Mexico City alongside the production of sculptures. Created from the usually unseen paperwork that is produced in the process of making an exhibition, it maps the journey taken from one planet to another. 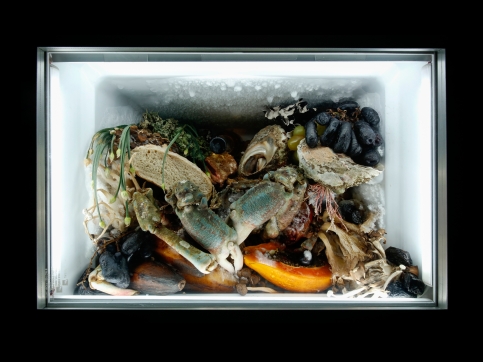